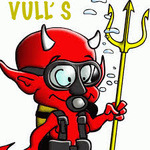 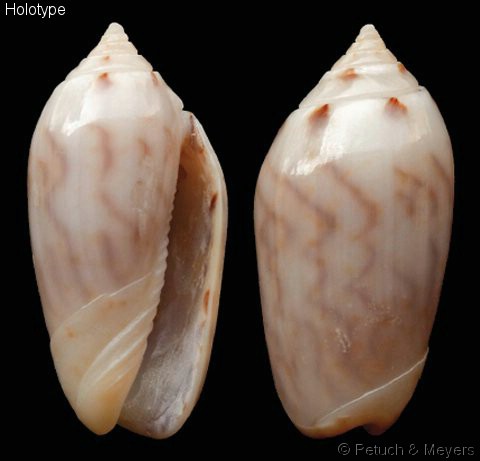 Range: At present, known only from deeper water off the coast of Ecuador.

Etymology: Named for Dr. James H. McLean, Curator Emeritus of the Department of Malacology, Los Angeles County Museum of Natural History, in recognition of his innumerable contributions to the systematics and ecology of the mollusks of the Panamic Province.


Discussion: With its distinctive and characteristic zebra color pattern, Americoliva mcleani is most similar in appearance to A. harpularia (Lamarck, 1811) from the southern part of the Gulf of California (see Petuch and Sargent, 1986: 153, plate 30, figure 26; listed as “Oliva (Strephona) venulata color form harpularia”). The deep water Ecuadorian A. mcleani differs from its far northern congener in being a much smaller shell (averaging 21 mm as opposed to the 38 mm length of the harpularia illustrated by Petuch and Sargent), in being more inflated and stocky, in having a clear, unpatterned area around the shoulder and filament channel, in having large dark brown, widely-spaced patches along the filament channel, and in lacking the characteristic large, prominent reddish-brown patch seen on the fasciole of A. harpularia. The Gulf of California and Ecuadorian species also differ in the form of their zebra color patterns; in A. mcleani, the stripes are more numerous and closer together and do not extend onto the shoulder area (having, instead, a wide colorless band), while on A. harpularia, the stripes are fewer in number, far more widely spaced, and extend onto the shoulder and filament channel, where they connect with the small patches that border the filament channel and carina. The similar zebra striped patterns of the two geographically widely-separated species is an artifact of convergent evolution, as no other similarly-patterned olives are known from anywhere between Baja California del Sur, Mexico and Ecuador. In 20-50 m depths off the Ecuadorian coast, Americoliva mcleani is now known to be sympatric with two other endemic Ecuadorian olivids, Americoliva polpasta radix (Petuch and Sargent, 1986) and Strephonella undatella ecuadoriana (Petuch and Sargent, 1986). 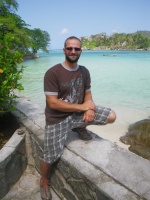