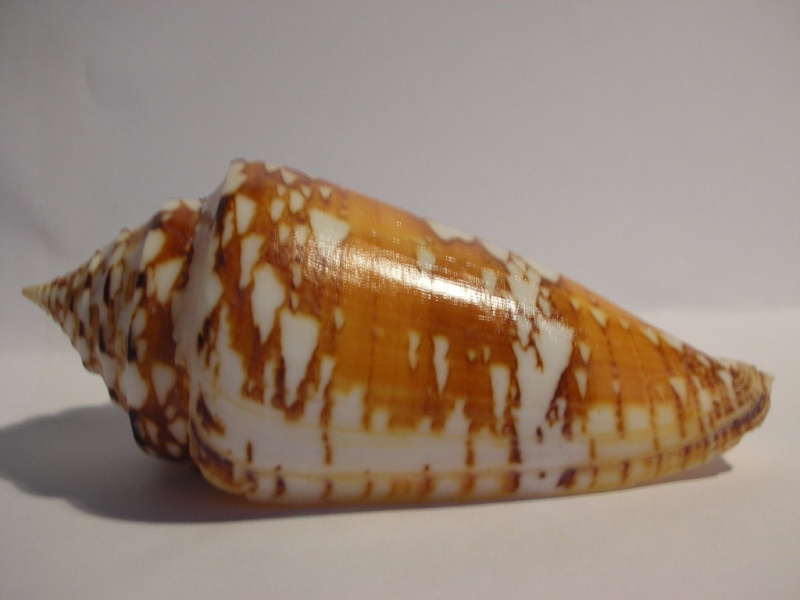 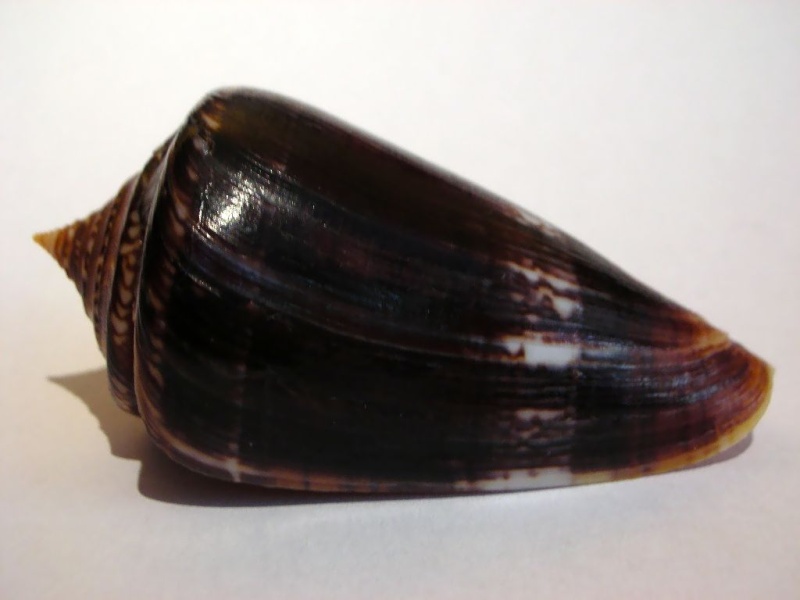 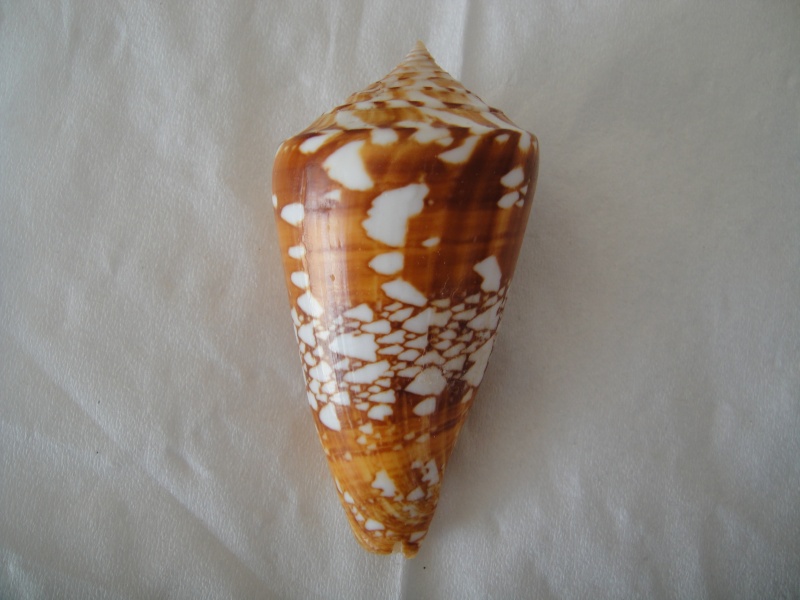 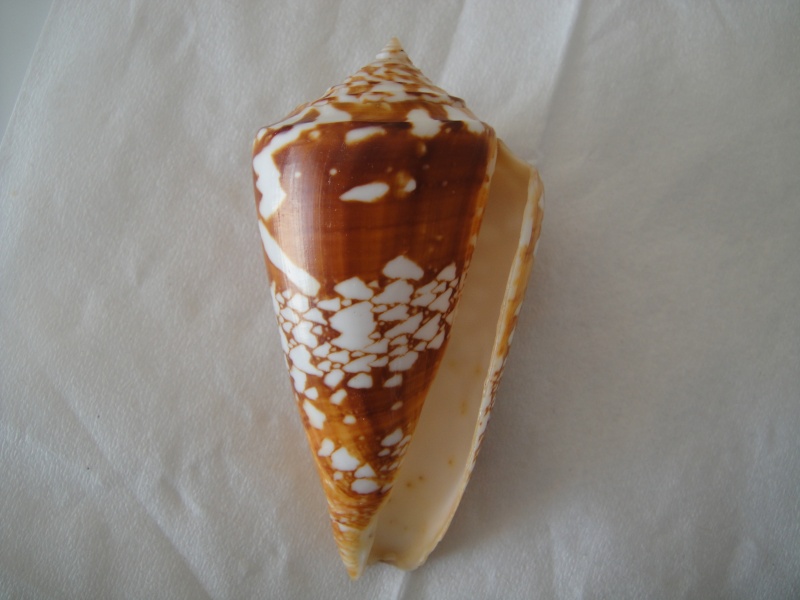 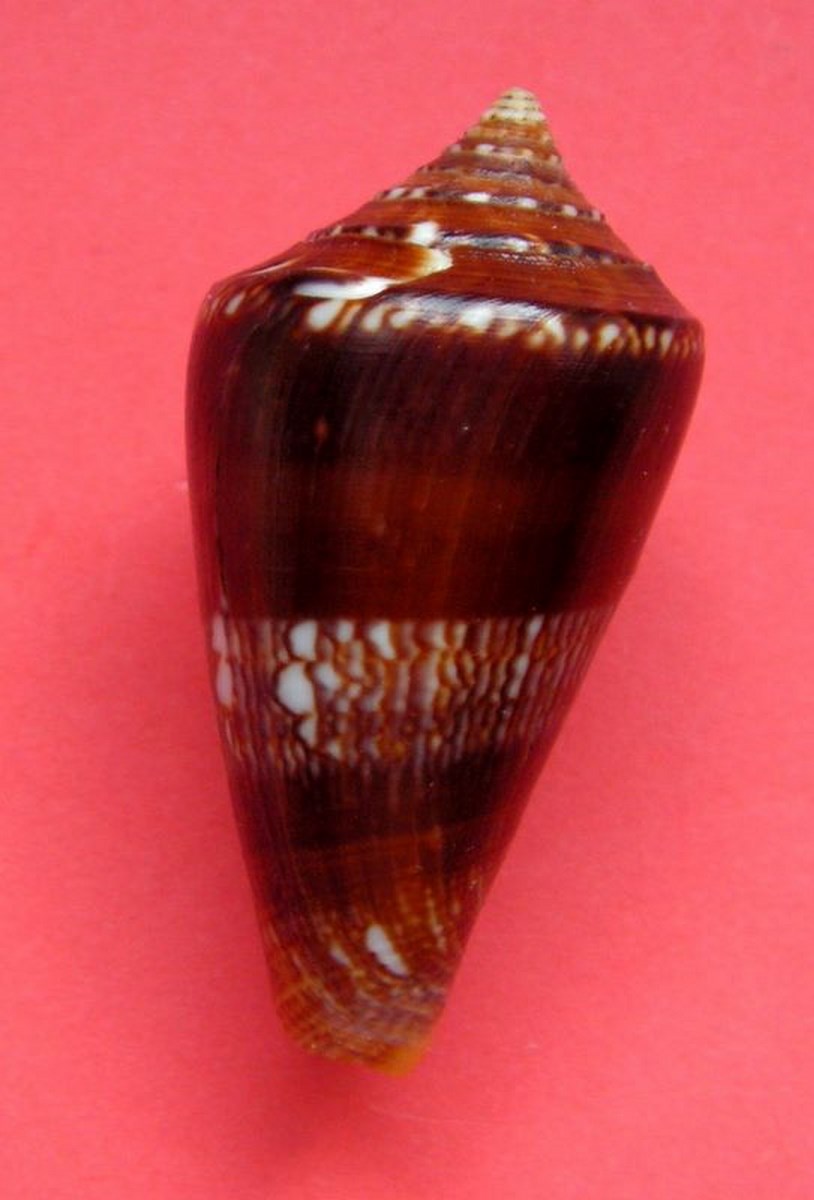 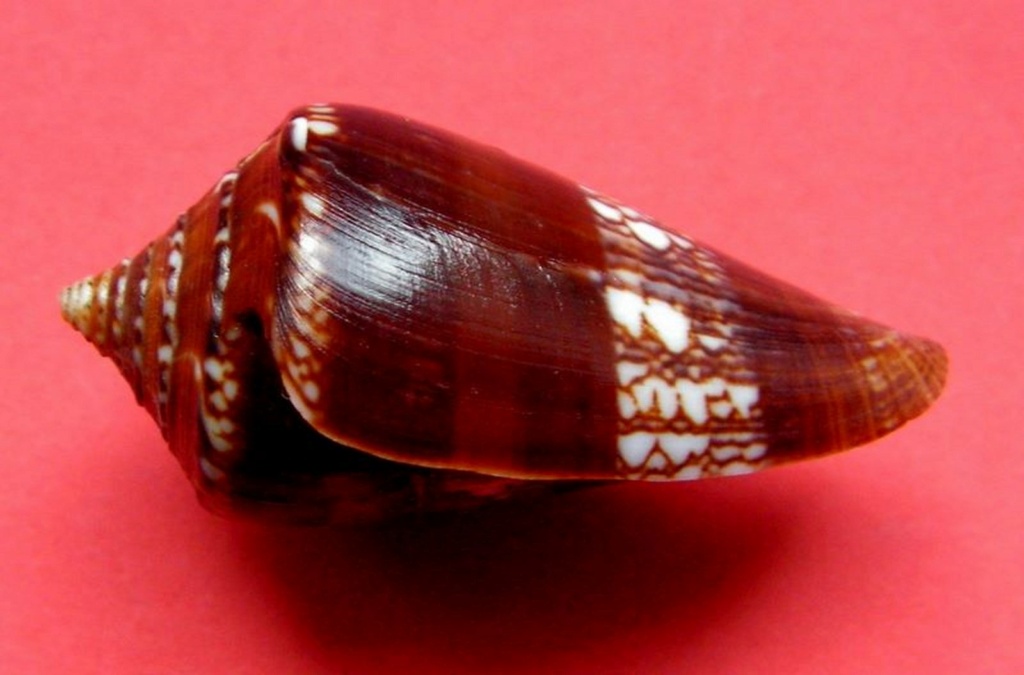 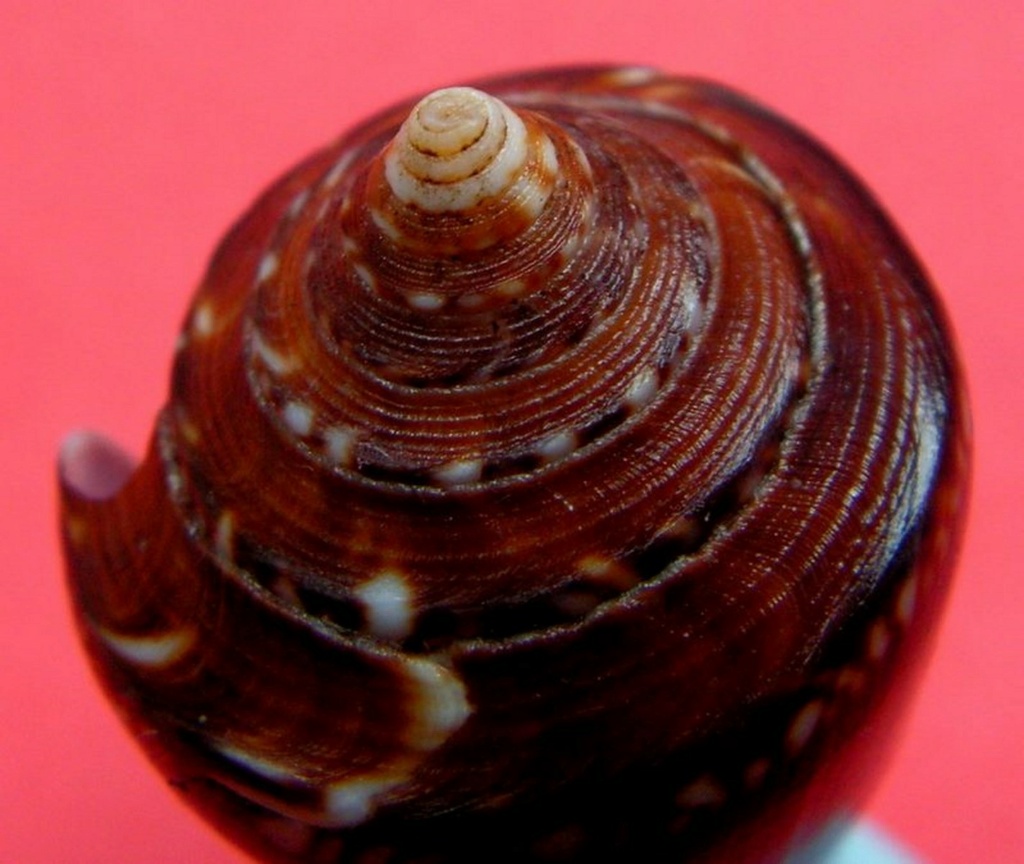 Voici ce qu' en disait le Dr. Röckel en November 1978 dans HAWAIIAN SHELL NEWS
By  DIETER  ROCKEL
DARMSTADT  -  Not  long  ago  I  received  a  very interesting  cone  from  the Bay  of  Bengal,  bearing  the name ''Conus schech Jickeli."  My  subsequent attempt to verify  the name led me to a prize example  of  "conus confusion. " My  new shell  closely  resembled  western Thailand's castaneofasciatus  Sowerby  in  shape, but  differed  distinctly  in  color and pattern.  Except  foc an  interrupted  white  band  in  the  middle  of  the  last whorl,  it  is  almost  uniformly  dark  red-brown.  The lower  part  is  a  lighter  shade of  the  same color. Along  the  spire  edge  is  a white  band,  very  small, crossed by  irregular  brown  lines.  The spire is the same color, with whitish half-moon dots. My own collection includes a shell called Conus schech from an old collection. Naturally, I took  the opportunity  to compare it with my new acquisition. The two were not at all alike! My efforts to clear up  the seeming  discrepancy led me into a  wonderland  of  taxonomic  contradictions. Although  I believe  I now  understand  the history  of  this bit of Conus Confusion,  I am not sure  that anyone is any better off!
Point  One:  The  name  "Conus  schech  Jickeli"  apparently  was never  validly  proposed. Carl  F.  Jickeli,  the Austrian  zoological  explorer of the  mid-nineteenth  century,  bought  two  unusual cones from  local  fishermen  on the Dahlak  Islands during  his Red Sea expedition.  He described  them  under the  name of  "Conus  schech"  in  an  unpublished  account  of  his  travels.  He  turned  the manuscript  over  to  H.  C.  Weinkauff  who  included  the  description  in  his Systematisches  Conchylien-Cabinet  of  1875. Weinkauff  called  the  new  shells ''Conus  schech Jickeli''.  The  action  leaves the species in  a tenuous position. Since  Jickeli  was  not  the  author  of  the  publication, under  ICZN  rules  he could  not properly  have his name on  the  species. Weinkauff  should  be credited. The proper name, therefore,  would  be Conus schech Weinkauff  or,  as some would  have it, C.  schech  "Jickeli"  Weinkauff.  But  not  "C.  schech Jickeli." Incidentally,  in describing  the new cone, Weinkauff erroneously  specified  Massawa  (in  modern  Eritrea)  as its  locality.  This  was later  corrected  to Dahlak  Islands by  Jickeli  himself.
Point Two:  Weinkauff's  illustrations  (Taf.  37, Figs. 9 and 10) show a cone that is similar  in every way to my specimen  from  the old  collection.  The shape  is not that of C. amadis  but of C. acumillatus.  This  is reasonable, since  the  true C.  schech  came  from  the  southern Red Sea, an area  to which C. acuminatus  is endemic but  in which  no  forms  of  C. amadis  have ever  been found. Unlike  the typical C. acuminatus,  the C. schech  has no tent markings.  Instead  it  has a network  of  very  fine longitudinal  lines.  The  difference  is comparable  to C. textile vs C. eumitus. I have not decided to my own satisfaction  whether C. schech is anything more than a variation of  pattern within a population of C. acuminatus or is a subspecies. At any rate, it does not appear to be a valid species. I propose tentatively to call it "Conus acuminatus schech  (Weinkauff,  1875)."
Point Three. What about the new specimen from the Bay of Bengal, alsocailed C. schech? Let us go back to Weinkauff. Before  publishing Systematisches  Coochylien-Cabinet  in  1875, Weinkauff naturally examined the literature. In Kiener (page  133 T.  99  f.  5) he found a species labelled Conus neptunus Reeve. Weinkauff recognized  at once that  Kiener's figure did  not match Reeve's description of C.  neptunus. The two represented separate species. Then Weinkauff made a mistake of his own. He identified his new C. schech  with  Kiener's  C. neptunus. True, there is a certain similarity, but the differences are obvious. From  the  figure,  Kiener's  C. neptunus is  without doubt  the same species  as my new shell from  the Bay of Bengal  and  apparently  is  a variation  of  C. amadis. For convenience, I will call this shell ''Conus amadis neptunus ( Kiener,  1843)."
Point Four.  We are not  yet at the end of  this  voyage of  discovery.  In  his  Thesaurus  Vol.  V,  1887, G.  B. Sowerby  identified  C. schech  with  C. amadis,  referring  10  Vol.  III,  Fig.  171  (1858).  But the latter figure  is not  the same as Kiener's  figure  of C. neptunus.  It  is very  similar  to  the shell  later  described  as C. schech. Tryon,  in  his  Manual  or  Conchology  (1884)  declared  (correctly,  in  my  opinion): ''C.  schech  is perhaps  only  an  extreme  variety of C. acuminatus  Hwass."  In  his  next  sentence,  however,  he confuses things  again by writing.  'It  is the neptunus  of  Kiener (not  Reeve)." Then,  to  carry  the  confusion  to  extremes,  he  illustrates his statement with  Kiener's  amadis  figure  instead of  the  figures  of  Weinkauff  or  Jickeli. The name Conus schech  seems  to disappear from  the literature  at  that  point. More  recent  works, such as Marsh & Rippingale's Cone Shells of the World and Abbott & Wagner's Standard Catalog ignore it. But now, suddenly, it returns to the repertoire of species names. Specimens are becoming available. Soon, I am sure, it will be on dealers'  lists.  Is it  too late to correct  this hundred-year-old  error? 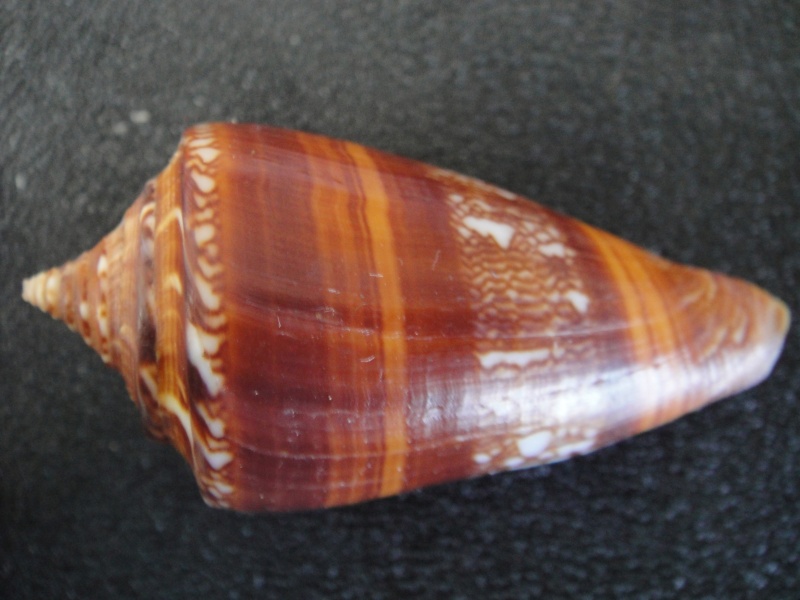 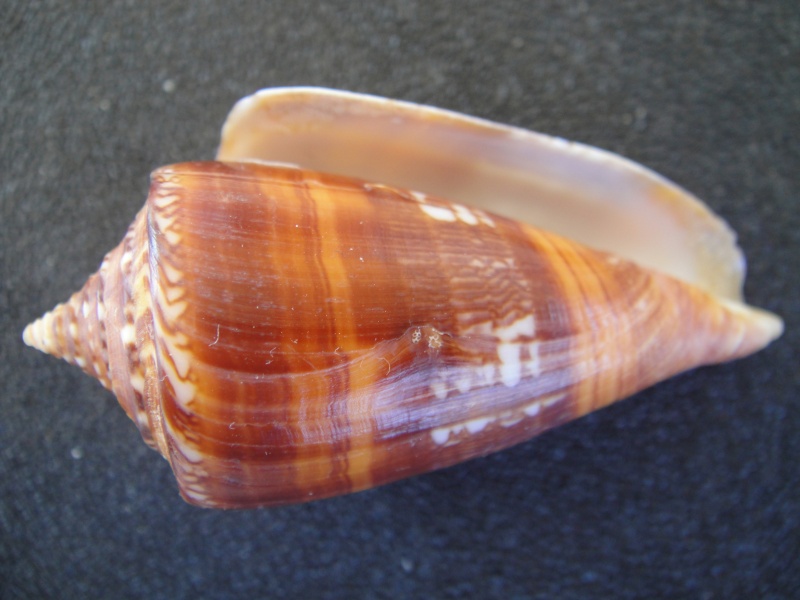 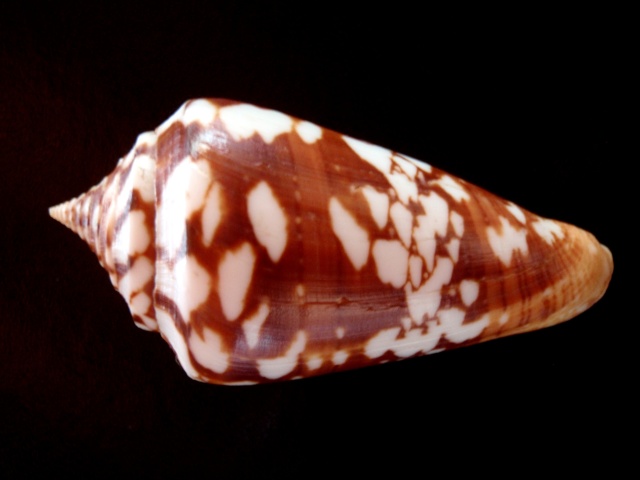 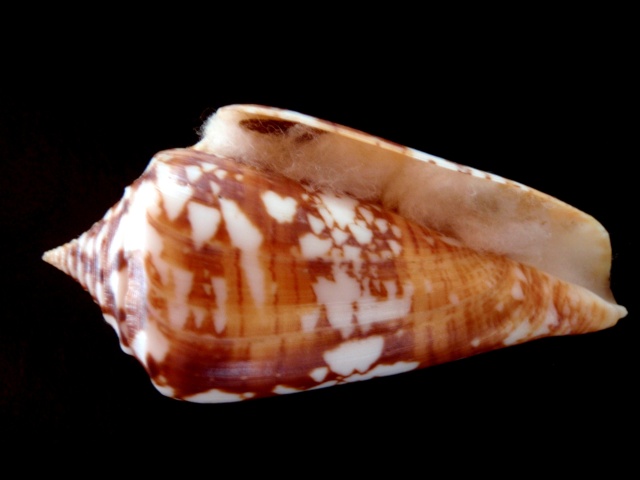